Religion, is a multi – faceted sword and to me, and is born out of fear. Fear of ?? God ?? sins??…….Well this post is not about analyzing these aspects of relationship between man and religion, it is about the culture, tradition, food that evolved out of this dogma of religion. A boon in disguise !!! 🙂

History of India has innumerable examples of misleading uses of religious practices and one of them are the Widows. Hindu religion has been harsh on it’s widows. Up until the mid 20th century, widows were treated like lepers. In Bengal, widows were restricted to household work and under strict dietary restrictions. Hence, religion and kitchen became an important part of their life. The traditional Bengal cuisine is very influenced by them. Well known 19th century Bengali author, Chitrita Banerji, quotes “it was impossible to taste the full glory of vegetarian cooking unless your own wife became a widow”.

Since widows were banned to use aphrodisiac condiments such as onion or garlic, garam masala,  high protein pulses, such as the pink lentils, the authentic recipes does not contain these ingredients. Thus the use of ginger, fresh coconut, mustard in Bengali vegetarian food took hold. Because of these restrictions, their search for variety in daily diet gave way to an ingenuity and improvisation, which gave us some of the tastiest vegetarian food. Since widows were forced to live a spartan life with limited meals and innumerable fasts throughout the year, the cuisine thus produced were health packed with limited use of oil and spices, yet lip -smacking in taste.

The rituals and  taboos made them innovative in the kitchen. Vegetable peels were used for chorchori and chhechki. Vegetarian dishes that mimic forbidden non – vegetarian foods —niramish deemer dalna made from cottage cheese and pulses, dhokar dalna, niramish mangsho (jackfruit), bori (sundried legume dumplings) — were invented. 🙂

With the passing time some such rituals changed or vanished. My father passed away 11 years ago. I and my brother counselled my mom against such religious practices and never allowed her to wear white fabric (symbolic of widowhood) nor allowed her to change her diet. She is the best cook for me and my ‘guru’. 🙂

Mulor chenchki with sun dried legume dumplings or radish stir fry is best eaten during winter when radish are in abundance and the taste is sweet and crunchy. The preparation can be adapted to non – vegetarian version by adding shrimp or fried fish roe dumplings.

The best part of chenchki is minimal use of oil and spices. Sonal @  my friend and mentor, has been a great source of inspiration for healthy cooking. ❤

Peel, wash and grate the radish.

Heat 1 tbsp oil (preferably mustard) and shallow fry the legume dumplings. Keep aside. In the same oil temper with the nigella seeds and add the grated coconut. Fry till coconut starts turning golden. Add the mustard and ginger paste.

Once it releases aroma and oil, add the radish, chili powder and tumeric. Stir for a couple of mins and then add the fresh green chili, salt and sugar. Cover and cook on a low flame till radish is cooked through and the moisture dried up. Check for salt and add the clarified butter and garam masala. Take it off fire. Garnish with chopped coriander. 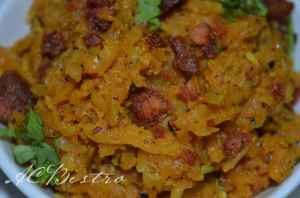 Hand crush the fried dumplings and add to the chenchki. Serve hot with rice. 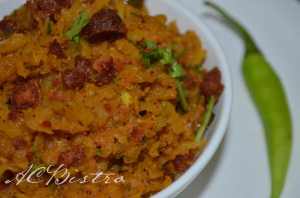 P.S. Can be served with hot paranthas or chapatis as well.

Let’s party and sorry for joining in late 😉

hi there.....friends call me Andy :) I am a school teacher by profession. Passionate about reading, some random experimental cooking, some hit 'n' miss photography......and i am a dreamer ;) Thank you for popping by :)
View all posts by andy →
This entry was posted in cooking and tagged chenchki, fiesta friday #30, fresh coconut, ginger, mulo, mustard paste, radish, stir fry, the novice gardener, traditional bengali cuisine. Bookmark the permalink.

Traditional Recipes with a Modern Twist

Light at the end of the Tunnel

Cooking up Smiles..Across the Miles

The Art and Craft of Blogging

musings of a frequent flying scientist

Memories of a Senior citizen

Journey Of A Travel Blogger To Live the Travel Life